California’s electric-grid management organization announced July 12 that large solar plants across the state had produced a new record of 8,030 megawatts of electricity. The organization running the grid, the California Independent System Operator, also said it is using more than double the solar electricity it was using two years ago. 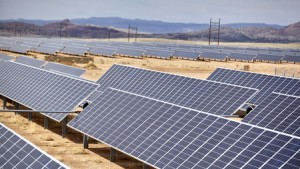 This rapid increase in solar power is not without its challenges. Electricity demand peaks around 6 p.m., just when people tend to get home and flip on the lights and TV and start cooking dinner. Output from solar plants peaks at midday, and then sharply trails off just as demand begins to peak. Relying on solar power means either storing some electricity generated during the day, reducing the demand at peak times, or using other sources to make up the difference.

For now, utilities in California have not found storage economic and are relying on the other two options. Pacific Gas & Electric is using incentives to drive down electricity usage and ramping up natural gas plants during peak demand times. The California grid operator is also looking at expanding to create a unified power market throughout the western states, and that may smooth over some of the peaks and valleys caused by intermittent renewables.

Another challenge coming to a head for California’s grid is integrating electric cars. As the industry has grown, Southern California Edison and San Diego Gas & Electric have developed plans to roll out charging stations in conjunction with companies that specialize in that business. A company called Volta, for example, is offering free charging and plans to make money from advertising and the promise of drawing electric car drivers to a certain business. Pacific Gas & Electric, however, has taken a much stronger stance and is insisting on retaining control over its charging stations.

Renewable energy is quickly reaching the mainstream of American energy consumption. With its emergence comes a new vocabulary and education process for the consumer. From Community Choice Aggregations to independent rooftop solar installations, the experts at EnergyCare are ready to support new initiatives and convey the benefits to the end user. Contact us today to start a conversation.