On March 28, President Trump issued an executive order aimed at redirecting America’s energy and climate policies away from fighting carbon emissions to a focus on a “new era in American energy” where affordable, domestic energy is at a premium. 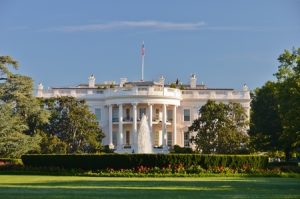 President Trump invited a group of coal miners down to the U.S. Environmental Protection Agency offices for his signing ceremony, and he told them the order meant “you’re going back to work.” While there is a great deal of skepticism that the order will do much to help coal miners, it does signal a significant reorientation of federal regulatory priorities.

The order has seven main sections:
1. New Priorities – The order sets a new policy for the federal government to focus on the development of energy resources with minimal regulatory barriers.
2. Deregulation – All federal agencies are required to conduct a review of their regulations to eliminate any that burden the development or use of domestically produced energy resources, in particular oil, natural gas, coal, and nuclear.
3. Erasing Obama’s Orders – President Obama had taken a number of executive actions to require the federal government to make climate change an important part of its decision making process, and Pres. Trump revoked all of them with the stroke of a pen.
4. Clean Power Plan Rollback – President Trump ordered the EPA to begin rolling back President Obama’s regulations on power plant greenhouse gas emissions. The regulations, called the Clean Power Plan, will be fairly complicated to undo and many environmental groups have promised a fight on this one.
5. Social Cost of Carbon Recalculation – To do a cost-benefit analysis of greenhouse gas emissions regulations, you need to know the cost to society of releasing carbon into the atmosphere. President Obama’s administration came up with an estimate, but President Trump wants to reconsider and probably lower the estimate.
6. Reopen Coal Leasing – President Obama stopped the leasing of federal land for coal mining, and President Trump will open that back up.
7. Review Oil and Gas Regulations – President Trump asked his administration to review several new regulations President Obama put on the oil and gas industry.

Trump’s policy shifts, while controversial, will certainly continue to shape energy markets and products, as well as the conversations energy providers have with the customers. EnergyCare executives maintain a keen awareness of industry trends and translate to the front lines of customer service response.